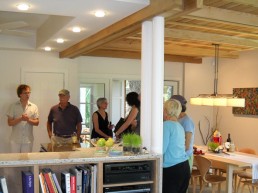 While our projects portfolio and testimonials give a more intimate sense of who we are and what we do, the following chronology of specific events – awards, publications and speaking engagements provides an overview of the Always by Design practice.

Sep 2015 AxD celebrates its tenth anniversary with 6 new projects in design and construction in PA & NJ.

Jan 2015 Awarded “Best of Houzz 2015” for diverse design portfolio of new homes from rural Maine to the Jersey shore and urban Philadelphia.

Aug 2014 Featured architect in Philadelphia Magazine’s “Best of Philly 2014” issue: Home Guide of Pros to Know, AxD is described as “…having an understated touch, smoothly resolving tough design problems before you know you have them”.

Nov 2012 Construction begins on new Archives of Science and Industry building at the Chemical Heritage Foundation in Philadelphia, PA. Project includes a mobile hi-bay shelving system (36 ft. high), the highest in the world.

Jun 2011 Ed Barnhart awarded “Architect/Designer of the Year” by the National Electrical Contractors Association (NECA) “for Outstanding Work on the design of the NECA Headquarters” for the Penn-Del-Jersey Chapter.

Mar 2009 Gallery facade unveiled of design-build project done for Bridge Art Gallery in conjunction with ‘Nothing to Fear’ painting exhibition by Peter G.-Ray.

Nov 2008 Awarded Merit Award by the Pennsylvania Chapter of American Institute of Architects (AIA) for AxD Studio and Gallery renovations.

Oct 2007 Awarded Honor Award by the Philadelphia Chapter of American Institute of Architects (AIA) for AxD Studio and Gallery renovations.

Jun 2007 AxD Studio and Gallery featured in CONTEXT, the journal of AIA Philadelphia, in Summer/Fall issue.

Sep 2005 The architectural practice of Always by Design (AxD) is formed by Ed Barnhart, AIA in Philadelphia.